The list of churches built in Milan and Lombardy after Constantine’s edict would be too long to describe.
However we can not fail to mention the four basilicas, such Ambrosiane because scrolls and built by St. Ambrose at the four corners of the city, just outside the city walls, over cemeteries.
1) “Basilica Martirum”, commonly called today Sant’Ambrogio, consecrated in 386 and completely rebuilt in the following centuries is a wonderful example of Romanesque architecture, but with the look unusual: it have two towers, one of the Benedictine monks (IX sec. ), the other, later (in 1128 AD) of the Canons. Why?
Because of, for the usual family squabbles, both wanted to have the right to play their own bells.
Do not miss in St. Ambrose, besides the altar of gold Volvinio, the Shrine of St. Vittore in Ciel d’oro, which dates back to the fourth century with a mosaic of the fifth century representing St. Ambrose (and other Saints).
2) “Basilica Apostolorum”, today San Nazario in Corso di Porta Romana, consecrated in 386 but subjected to numerous alterations and additions. 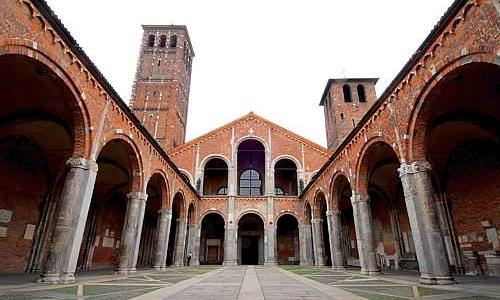 3)
“Basilica Virginum”, now called San Simpliciano, finished precisely from San Simpliciano, successor to Ambrose between 397 and 401: it has undergone several restorations the most recent of which have brought to light part of the early Christian structures, giving back to the church Romanesque features due to changes to the XI-XII century and the original brightness of the interior that must be reported.
4) “Basilica Prophetarum” (then called St. Denis) demolished so well in 1783 (to make room for public gardens) that none remained aluna track.