In 303 A.D. Emperor Diocletian Constantine, with one of its four edicts against Christians, order the destruction of their places of worship.
What were these places of worship?
Christianity had spread even in the upper classes and it is likely that in their own residences and suburban villas one or more premises were used as places of worship, later converted into churches built on the ruins of those places. In Lombardy this interesting hypothesis seems to be confirmed in at least in three places: the parish church of St. Martin in Palazzo Pignano near Crema, the church of St. Mary the red Gratosoglio quarter of Milan and the old church of St. Peter the elm, a few kilometers from Milan on the road to Novara.
In all cases, below and adjacent to the church, which has in general but many remakes of ancient origin, were found the remains of a sumptuous villa, with mosaics and environment heated by hypocaust. 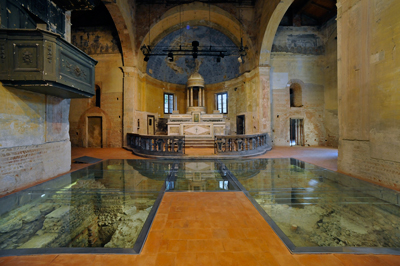 The three sites are for visit, especially the archaeological site of Palazzo Pignano, with adjoining antiquarium, worth a visit.
Ten years later, in 313 AD, the ‘Edict of Constantine, issued just in Milan, distorts the situation: the Christian religion is recognized as lawful and confiscated assets are returned to the Christians.
A little later will be born the first churches, archeologically and historically proven.