Conventionally divided into Copper Age, Bronze Age and finally Iron Age, the period saw not only the introduction and improvement of metallurgy applied to different metals and alloys but also a succession and a diversification of cultures, made evident by the archaeological finds, in particular forms of the vases and funerary rites (burial, cremation) documenting intense cultural exchanges with the world of the Trans-Alps and the Po Valley.
The rich archaeological material that relates to the period and that can be seen in several museums in the region, not only in the capitals but also in small local museums, equally interesting (for example the Museum of Gavardo that presents the cast of a monossile pirogue of  the Bronze Age ), are matched by very few archaeological sites equipped and visited.
Besides the already mentioned Isolino Virginia is noted for its importance, the Archaeological Park of Forcello in Bagnolo San Vito, near Mantua, where it was excavated and is still being excavated an Etruscan settlement of the VI-V century B.C. testifying cultural exchanges that the region had with the Etruscan world and, mediated by this, with the greek world. 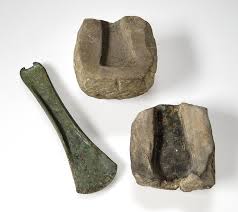 Worth a visit (and maybe an outdoor dining) is then the picturesque site of Castellaro Lagusello, in the high Mantua, with medieval castle and small moraine lake where they were found the remains of a lake-dwelling settlement dating back to the Bronze Age. Its archaeological material is exposed to the museum of Cavriana.