The Roman theater in Milan was built in the Augustan era, between the late I and the early II Centuries. The building had a 20-meter tall stage and a 95-meter wide cavea. The theater could contain between 7000 and 9000 people, at the time there were around 25000 inhabitants in Milan. The area where it was built was of fundamental importance in the old Mediolanum. The theater kept its original function until the IV or the V Centuries, when Emperor Theodosius edicts and the Church’s s progressive acquisition of power started prohibiting theatrical and sport performances in amphitheaters. In 402 Milan also lost the title of capital of the Roman Empire, acquired in 287. The last show that we have knowledge of was Flavius Mallius Theodorus proclamation as consul in 399. A naumachia (the staging of a naval combat) also took place on this occasion. The theater was used as a gathering place of the city Senate during the Medieval Communes period, as reported in two documents from 1119 and 1140. It was destroyed, along with many other parts of the city, by Frederick I in 1162. The remains were soon covered by other buildings and the theater was only discovered towards the end of the XX Century, in 1880, during the building of Palazzo Turati. In 1929 the Palazzo della Borsa was built on the remains of the theater, which was officially recognised. 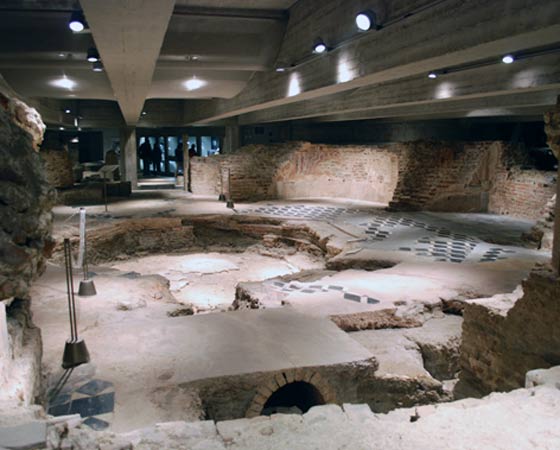 Since February 2008 it is possibile to visit the remains of the old building under the Palazzo della Camera di Commercio. The exhibition showcases museum labels but also offers a visit of the old Mediolanum, accompanied by simulated sounds and smells of the original theater.