Roman and Langobard Brescia, the Lioness of Italy

The Parco Archeologico di Brescia Romana (Archaelogic Park of Roman Brescia) has been open since the 9th of May 2015 and you absolutely should not miss it. The park includes the oldest and most important historical builidings of the area: the Sanctuary built in the Republican era (I Century BC), the Capitolium (73 AC) and the Theater (I-II Century AC).

As far as their preservation is concerned, these buildings are the best ones that you can find in Lombardy, if not in the whole North of Italy. Just as important is the Santa Giulia Museum, located in a monastery required by the langobard king Desiderius in 753 AC and that, besides including the langobard basilica of S. Salvatore and its crypt, the Romanesque oratory of S. Maria in Solario and the Coro delle Monache, also houses an indescribable treasure of historical finds ranging from prehistory until today. We also need to mention the ”Vittoria Alata”, the symbol of the city and the “Croce di Desiderio”.

When in Brescia, we suggest visiting the Castle, from which you can enjoy a beautiful view. The Castle, built in around 1200 BC and whose history has continued until 1945, hosts a weapon museum as well as a Renaissance Museum, celebrating the heroic “10 giornate di Brescia” (10 days of Brescia) of 1849 that gave the city the name of “Lioness of Italy”.

In the Brescia area, we also highlight important Roman finds and beautiful panoramas that you can find in the Villa Romana in Desenzano, with its antiquarium, and the “Grotte di Catullo” (Catullus Caves) in Sirmione and the city of Sirmione itself, with its Scaligero castle and the Romanic church of S. Pietro in Mavino. 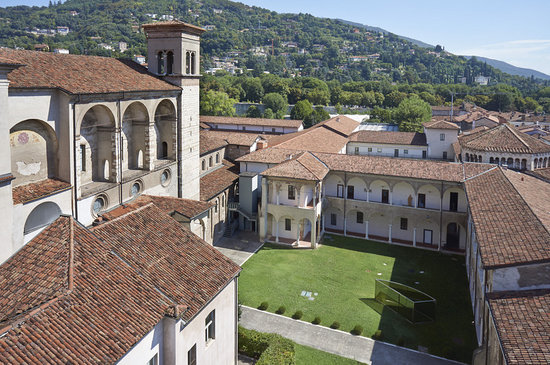 Another place worth visiting is San Martino della Battaglia. We suggest climbing up to the top of the tower that was built to celebrate the second war of independence (1859), so that you can enjoy a breathtaking panorama. And finally, don’t forget to have a sip of the local DOC (controlled designation of origin) wine.