Historical records of the monastery trace back to the Carolingian era. This monastery partially re-uses some Roman buildings, for instance it includes a polygonal tower, remains of the old walls of Maximian, and a square tower, originally included in the Roman circus. 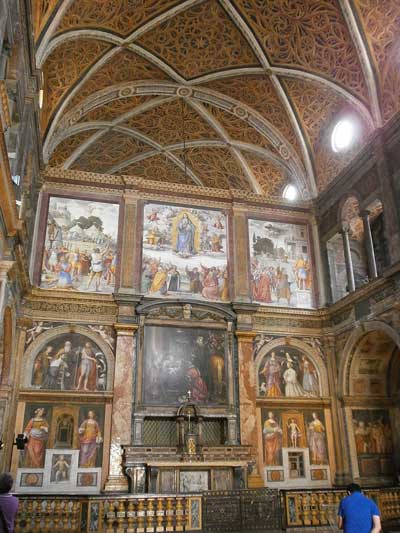 The church as we see it now was built starting from 1503, as you can read from a stone engraving that was found in the apsis. Every document regarding its design was lost, but critics associate it to architect and sculptor Gian Giacomo Dolcebuono, with the aid of architect Giovanni Antonio Amadeo, who were responsible for the building of the lantern of the Duomo di Milano at the time and also worked in the Certosa di Pavia and the church of Santa Maria near San Celso. The building was completed in very few years, in fact the first gravestones had already been placed there in 1509. The painting of the majestic frescos, that made the temple famous and loved by Ruskin and Stendhal, started in the second decade of the XVI century and was realized by the artists who worked in the studio of Leonardo Da Vinci, who was engaged in Milan painting the Virgin of the Rocks during those years, for example Giovanni Antonio Boltraffio.
Most of the building process was funded by the powerful Bentivoglio family, to whom belonged Alessandro, governor of Milan and son of the Lord of Bologna Giovanni II Bentivoglio and his wife Ippolita Sforza, daughter of the Duke of Milan Ludovico il Moro. Four of their daughters were sent to the San Maurizio cloister and Alessandra has been its abbes for six times.
After the bombings of the II WorldWar, the second cloister was destroyed as well, and the building became the location of the Civico archaeological museum of Milan.