In the fifth century we see the decay of the Roman Empire of the West and worthless prepared defenses in strategic places mentioned in Lombardy CASTELSEPRIO (shown in the “Places to see”) is an example. Lombardy is in front of the first barbarian invasions.
They serve no purpose and value the efforts of military commanders as Stilicone and then Ezio (which were of barbarian too) who, because of their value and their loyalty, are made out by the emperors of the time.
And if the so-called “barbarians” were in Italy (and elsewhere) is not always for the sake of making raids and destroy it is because they too were subject to pressure that came from the East (Financo from Mongolia) and competition possession of lands or because they wanted to get something more than they assigned their empire.
So in 401 Alaric with his Visigoths, leaving Epirus, where he had settled with the consent of the emperor of the East, invades the Venezie, take Aquileia, then besieging Milan and goes up in Piedmont where he was defeated by Stilicho ( Pollenzo 402 AD) so that withdraws Illyricum and Pannonia.
In fact the Emperor (of the West) Honorius, given the precarious situation takes refuge in Ravenna and Milan ceases to be the capital of the Western Empire. 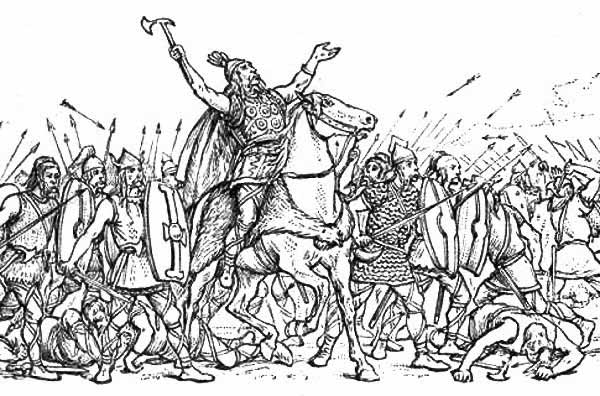 In 406 to invade Italy has tried Radagaisus with a horde of Goths, Huns, Sarmatians, Alans but Stilicone beats him in Fiesole.
In 408 Alaric tries again that, taken Rome, pointing south to spend in Sicily and Africa but died in Cosenza. Ataulfo, his brother and successor, back to North with Galla Placidia to settle in Gaul.
Last but not least in 452 Attila, Scourge of God, after he was defeated last year by Ezio (with the Visigoths) Champs Catalaunian in Gaul, he returned to Italy, destroying Aquileia, he plunders Milan and Pavia then, convinced by Pope to Mantova Leo, if he goes home, where he died the following year.