What is Oltrepò Pavese? It’s the tail of region Lombardy that, in the Pavia area, goes below river Po. Its shape is roughly triangular, a sort of compact bunch of grapes hanging down a shoot, which represents the big River Po. The beginning and the tip of this “bunch of grapes” are not ideal to plant grapevines, as they are either too flat or too mountainous. The remaining part of the bunch is the Oltrepò, a softly hilly area which is still quite steep in some places, where mankind has been planting grapevines and producing wine since the dawn of time.
Due to its about 13500 hectares of vine-covered hills, Oltrepò Pavese is one of the five biggest Italian denominations. Among the different varieties of grapevines Pinot noir is king: it is planted on about 3000 hectares and makes this area one of the most renowned Pinot noir producing areas in Italy.

Pinot noir and its different “colors”

Some ampelographers have hypothesized the presence of old Pinot noir genotypes on the Oltrepò hills, that we can trace back to the Roman era. More certain hypotheses date back to 1500, although it was only in the second half of 1800 that different hectares of French Pinot noir clones had been successfully planted in Rocca de’ Giorgi. It was the start of a new adventure that involves the entire area and also characterizes it for its production of Italian sparkling wine spumante. In 1912, the billboard “Gran Spumante Svic” (Società Vinicola Italiana di Casteggio) stood out next to the Statue of Liberty in Milan, making a lot of incoming emigrants from Italy emotional. The following years went by in a frenzy, with a lot of different brands receiving numerous prizes. In 1970 the DOC label “Oltrepò Pavese” was created, as well as DOCG label ‘Oltrepò Pavese Metodo Classico’ in 2007 and DOC label ‘Pinot nero dell’Oltrepò Pavese’ in 2010, which is dedicated to still red wine. If we try and translate the Oltrepò Pavese Pinot noir wine varieties into different colors, Pinot noir offers a big spectrum of colors ranging from white to red, but the most original expression of color are the pink bubbles, whose more recent history actually has old roots.

Cruasè, the flagship “brand” of this area

The birth of the DOCG Oltrepò Pavese Metodo Classico label has brought to the conclusion that the rosè wine variety is the real flagship of the area. Rosè is a symbol of the area, but at the same time the emblem of the most noble technique of producing spumante wines. The ‘pink choice’ bonds the strong personality of the pink bubbles with the value given by its natural origin (the soft pressing of Pinot noir grapes naturally creates a pink must), for this reason it has been given a label that is immediately recognizable to the eye of the consumer: Cruasè. Cruasè derives from the word cru (selection) and rosè, and symbolizes the original Metodo Classico (traditional method) used in Oltrepò Pavese to produce rosè wine from Pinot noir grapevines. Metodo Classico makes this area distinguishable from the other areas that produce spumante wines in Italy or abroad. Rosè wine can be produced in different varieties, such as Brut, Extrabrut e Brut Nature, reaching a minimum aging time of 18 months. It is ideal to accompany with food, snacks and finger food or, alone, to enjoy as an original and tempting drink. 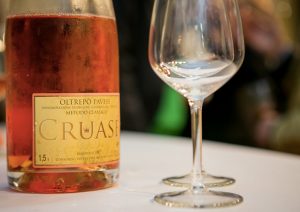 In the Oltrepò area Pinot noir has been produced in its white version, the most common variety of Metodo Classico in the world, since the early ‘900. Considering all kinds of bubbles, we can say that this wine is characterized by varietal vigor and austerity, that experts love and which can be more or less strong depending on the reached yeast levels after the many years of aging on the wine dregs (millesimati).

The promotion of red Pinot noir wines, started by many businesses in the ‘50s, brought to the birth of the DOC Pinot nero dell’Oltrepò Pavese label, entirely dedicated to this exclusively still wine.
As many enologist in the world know, the process of producing Pinot noir red wine can be tricky and sometimes disappointing, but, when it’s successful, it results in an amazing product that can express its personality at any degree. It is a real challenge that allows Oltrepò to compete on a global scale, as Pinot noir red wine bottles represent the original red wine.