A journey through the traditional desserts of Mantova

Today we are going to talk about the traditional desserts of Mantova. The historian Renzo dall’Ara titles his essay about the cuisine of Mantova “Cuisine for princes and peasants”, that combines gourmet food, appropriate for the fancy Gonzaga court, with humble dishes, where any ingredient can be transformed into something good. All the traditional baked goods and pastries of Mantova, ranging from the most elaborate and delicious to the humblest, are synonymous with holydays and abundance, as well as a sort of ritual against famine. 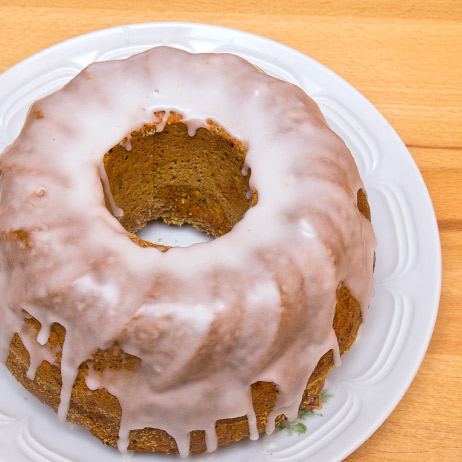 Anello di Monaco (Monaco’s ring) is a typical and elaborate dessert of Mantova and the most consumed pudding during Christmas holidays. It has a peculiar donut shape reminding of a hat, a pleasant buttery smell and an almond and hazelnut filling. Its dough reminds us of Milan’s Panettone, and actually the two recipes are pretty similar. However, Anello di Monaco differs from his “cousin from Milan” because of the hole, as big as the bottom of a wine bottle, and the thick, sugary, white icing on top of it. Furthermore, it is filled with alternate layers of toasted almonds and hazelnuts, sugar and Marsala wine. Other variations include chocolate filling.
Anello di Monaco dates back to the end of XVIII century, when the Swiss baker Samson Putcher settled in Mantova. He opened his own bakery shop and started baking traditional Swiss and Mitteleuropean desserts, which were delicious but had odd-sounding names like Gateau Helvetia, Krapfen, Sachertorte e Kugelhupf. The latter’s name was truly unpronounceable for the people of Mantova, who renamed it “Anello di Monaco” (Monaco’s ring) for his shape and elaborate filling. Anello di Monaco is best served with a glass of white or red passito wine (if filled). 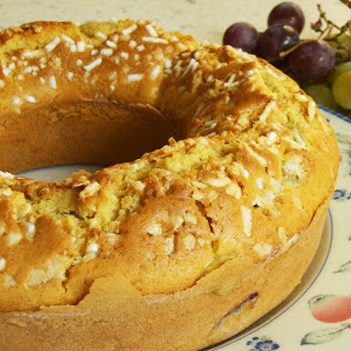 Bussolano is a less exotic but widespread dessert throughout the province of Mantova. It used to be the typical peasants’ pudding.
It is a soft, non-filled, donut-shaped cake which in times past used to be as hard as a rock, since baking powder didn’t exist. Bussolano can either have the classic donut shape or a rectangular one.
As it used to be incredibly tough, this cake is always served with a glass of wine, sometimes even dipped in it. 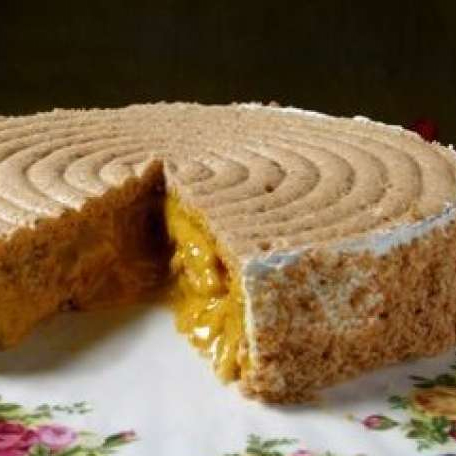 Helvetia (or Elvezia) cake is rightfully considered one of the tastiest desserts in Mantova: butter cream and zabaione placed in alternate layers between 3 discs of pastry, made with chopped almonds, whipped egg whites and sugar. Interesting fact: people from Mantova claim to be the inventors of the zabaione, since the earliest known zabaione recipe was created by the Gonzaga’s court’s chef.
Helvetia cake, just like Anello di Monaco, was created by the Putscher family, Swiss bakers coming from the Grisons’ canton. They opened a bakery shop in Mantova at the end of XVIII century and baked a cake that combined both Swiss and Italian traditions. They chose to dedicate this dessert to their homeland and named it Helvetia cake.
Pairings: Helvetia cake is best served with a glass of Spumante Metodo Classico Brut. 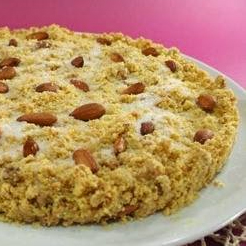 Here comes the symbol of Mantova’s confectionery: Sbrisolona cake, also known as Sbrisolina or Sbrisulada. The name comes from the “brise”, big and small crumbs that form when breaking this crumbly cake. In fact, according to tradition, this cake is never cut with a knife.
The original recipe for the Sbrisolona cake calls for the same amount of white flour, cornmeal and sugar. Other ingredients include almonds, butter, eggs, yeast and sometimes Marsala wine. This light-coloured, crumbly cake has a rich and round taste, with intense notes of almond and butter.
The origin of the Sbrisolona recipe dates back before the XVII century, when – apparently – this cake arrived to the court of the Gonzaga family.
Pairings: Sbrisolona cake can be eaten alone, but usually people from Mantova enjoy it paired with some mascarpone cream or warm zabaione. In the local “trattorie”, this cake is commonly served with a small glass of grappa, which contrasts its sweetness. 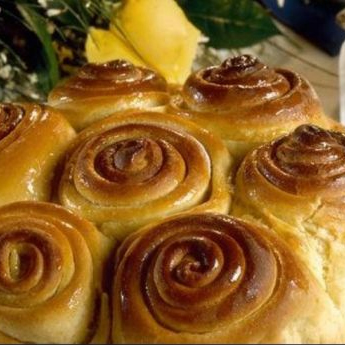 Torta delle Rose (Rose cake) is another traditional dessert of Mantova, with a unique shape and an interesting story. It is a buttery, yeast-leavened cake with an unusual shape, since it’s made by several dough rolls (the roses) arranged in a concentric circle: an interesting variation of the classic Italian sweet bread.
Torta delle Rose has ancient origins that date back to the times of the Gonzaga family. In fact, this delicious cake was created to celebrate the marriage between Isabella d’Este and Francesco II. It happened to be highly appreciated by the Lords of Mantova, who chose to serve this dessert during important receptions.
Torta delle Rose is best paired with a glass of Spumante or a white Passito delle Colline Moreniche Mantovane. 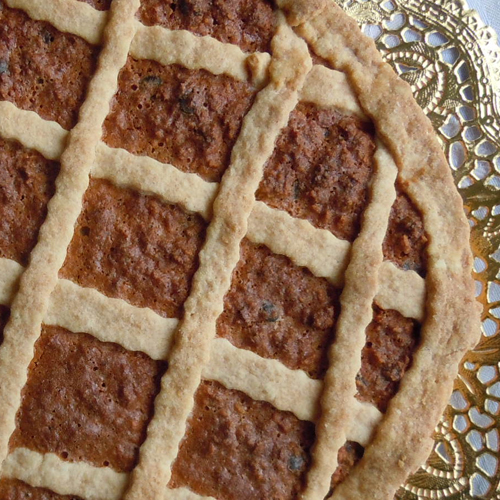 Torta di San Biagio (Saint Blaise’s cake) is a traditional dessert made in Cavriana, a small village in the hills north-east of Mantova, not too far away from the southern shore of Lake Garda.
This round-shaped cake has a delicate flavour of almonds and chocolate and a friable, unleavened pastry. The strips of pastry trimmings on top of it create diamond shapes through which we can see the brown colour of the filling.
From 2nd to 4th February, a festival is held in Cavriana to celebrate the feast of Saint Blaise (San Biagio in Italian): a tradition over than 450 years old which centers around local wine and food. On February 3 an ancient ritual takes place: “Al dì ‘d San Bias as benedis la gola e ‘l nas” (“On Saint Blaise’s day, we bless throats and noses”). In other words, the priest gives the blessing of throats by using two candles joined together in the form of a cross and placed near the throat of the recipient. That’s why people from Mantova always turn to Saint Blaise when they have a cold or the flu during winter months.
Torta di San Biagio is the main dessert during Saint Blaise’s feast. Legend has it that in olden times this cake used to have a 3-meter diameter and used to be sliced and offered to the believers.
Pairings: Torta di San Biagio tastes even better if paired with a glass of red Passito delle Colline Moreniche Mantovane. 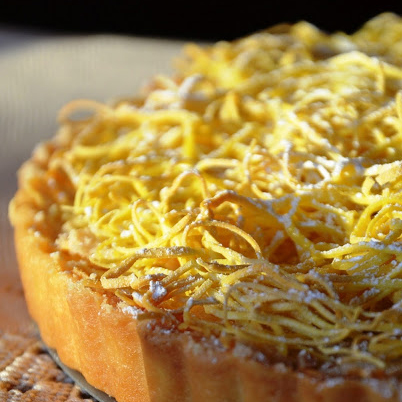 Torta di tagliatelle (Tagliatelle cake) is a traditional dessert of Mantova, in particular in the area of the Oltrepò Mantovano, which at first used to be baked only during holidays.
This almond cake is round shaped, with a golden-brown colour, a dry, friable texture and a flavour of almonds and sweet liqueur. This dessert’s peculiarity are the thin pastry stripes (the “tagliatelle”) in it.
It is prepared in two steps: first, the pastry is cut into thin strips, then the tagliatelle is placed in alternate layers with sugar and almond paste.
Pairings: Torta di Tagliatelle is best served with a glass of Spumante Metodo Classico or some white Passito delle Colline Moreniche del Garda. 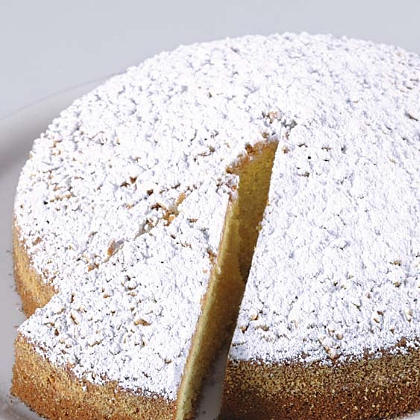 Last but not least, Torta Paradiso (Paradise cake): a typical, “high-end” dessert of Mantova, which was specifically created for Isabella d’Este Gonzaga (is also part of the culinary tradition of Pavia).
Torta Paradiso has a 40cm diameter and can weight up to 2kg. Its main ingredients are: sugar, lemon, butter, baking powder, potato starch, almonds, white flour, eggs and of course a sprinkle of vanilla sugar on top.