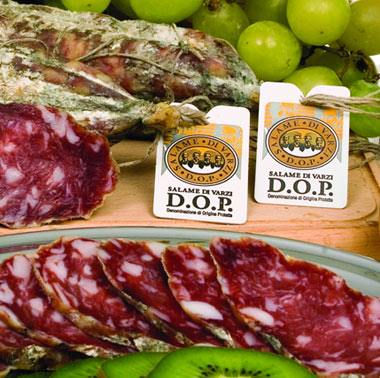 According to historical records, the Langobards have introduced the breeding of pigs in Valle Staffora.
Valle Staffora is a valley that was created by the Staffora stream, located in the Oltrepò Pavese.
This Apennine valley is partially surrounded by mountains, it is hilly in the area of Varzi and flat where the Varzi stream merges with River Po.
Besides breeding pigs, the Langobards were the first people to stuff salami with ground meat, thus producing the first cured meat sort, the salami. Salami is a long-life nutritious food that doesn’t require long cooking times, and it was thus ideal for a nomadic population.
In the XIII century the marquis family Malaspina, who strongly bounded their family name to this areas, offered their guests, who reacted with enthusiasm, this delicious food.
With the passing of time, salami became one of the basic types of food for farmers, whose main food source were pigs, allowing them to survive.
The Salame di Varzi Dop has a tender but yet compact dough, soft to the touch and without holes. When you cut it through it is bright red but has perfectly white fat parts.
Depending on the aging period, this product can release a more or less intense spicy scent, a slight moldy odor and the smell of bread crusts, herb seasoning, green wood and mimosa. The taste is sweet and delicate, with a slightly bitter aftertaste.

There are different kinds of Salame di Varzi DOP:

Now you just have to slice your Salame di Varzi DOP and taste it with homemade bread and a great wine!