The “Pax Romana” from Octavian Augustus to Marcus Aurelius

The I and II sec. A.D. They are characterized by a situation of stability and prosperity that affects all the provinces of the empire, including Lombardy, then called “Riviera” and “Transpadana” because the Lombards had not yet arrived.
This prosperity, for subsequent demolition and reconstruction (or re-use of materials) few visible traces remained in Lombardy, with the exception of Brescia, Desenzano and Sirmione which deserve a separate chapter.
In most cases the surviving archaeological remains are hidden in private homes, in the courtyards and even in the basement.
In Milan, the only vestiges of the period, easily accessible and worth a visit (among other things are very close) are the columns of San Lorenzo and the remains of the amphitheater (or Roman arena) returned to fruition in an archaeological park with adjoining antiquarium dedicated to the archaeologist and scholar Alda Levi (Via De Amicis 17).
Columns of San Lorenzo were recovered from buildings of the Flavian and willing, it seems in Late Antiquity (V sec. Or later) to form a colonnade closing the large square in front of the basilica of San Lorenzo, the square where, however, the Excavations have revealed the existence of a portico, now disappeared. 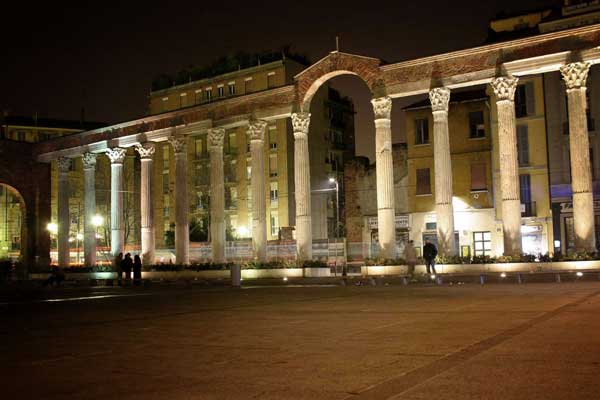 As evidence of the sequence of multiple urban interventions should be noted, also in Milan, which until 1935 (less than a hundred years ago), the square was occupied by an entire block of tenement buildings.